A summary of the seminar:

Smart cement with 0.38 water-to-cement ratio was modified with iron oxide nanoparticle (NanoFe2O3) to have better sensing properties so that the behaviour can be monitored at various stages of construction and during the service life of wells. A series of experiments evaluated the piezoresistive smart cement behaviour with and without NanoFe2O3 in order to identify the most reliable sensing properties that can also be relatively easily monitored.

Tests were performed on the smart cement from the time of mixing to hardened state behaviour. When oil well cement (Class H) was modified with 0.1% of conductive filler (CF), the piezoresistive behaviour of the hardened smart cement was substantially improved without affecting the setting properties of the cement. During the initial setting, the electrical resistivity changed with time based on the amount of NanoFe2O3 used to modify the smart oil well cement.

The piezoresistivity of smart cement with NanoFe2O3 was over 750 times higher than the unmodified cement depending on the curing time and nanoparticles content. Also, the nonlinear stress-strain and stress-change in resistivity relationships predicted the experimental results very well. Effects of curing time and NanoFe2O3 content on the model parameters have been quantified using a nonlinear model (NLM).

Short bio of the spea 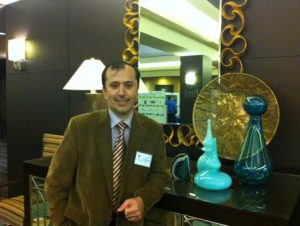